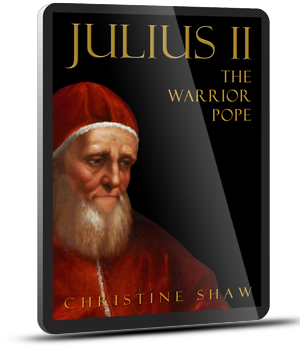 Distinguished by enthusiasm, restraint, painstaking research and lucid exposition of the labyrinthine politics of Renaissance Rome and Italy – a delight to read.

Julius II was one of the most remarkable and colourful men ever to sit on the papal throne. His vigour, determination, ambition, passion for action and notorious temper were more suited to the soldier he would probably have preferred to be, than to the ecclesiastical potentate he became under the patronage of his uncle, Pope Sixtus IV.

A cardinal for 30 years before his own election, Julius enjoyed a long career in at the centre of the political life of Renaissance Italy. After becoming pope in 1503, he revived the temporal authority of the papacy by his military campaigns, some of which he conducted in person. He was also an outstanding patron of the arts and commissioned major works including the Sistine Chapel ceiling. Many of his actions, however, compromised the papacy’s spiritual authority, attracting the satire of Erasmus and contributing to Martin Luther’s crisis of conscience.

Shaw’s account includes new material about Julius’ career as a cardinal, which should give fresh perspectives on his policies as pope. The reports of those who negotiated with him, those who observed him and spied on him, ridiculed him and admired him, are used to depict the vivid, powerful and humorous personality of the “papa terribile” and the impact he made on his times.