The March of Folly 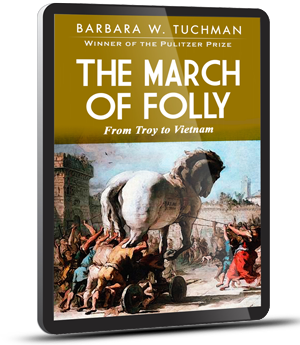 Like her past books, her new one is witty, intelligent and elegant. Tuchman without question is the most skilled popular historian in practice.

In The March of Folly (originally published in 1984) Pulitzer Prize-winning historian Barbara W. Tuchman explores one of the paradoxes of history – the pursuit by governments of policies contrary to their own interests despite the availability of feasible alternatives. She draws on a comprehensive array of examples, from Montezuma’s senseless surrender of his empire in 1520 to Japan’s attack on Pearl Harbor.

In brilliant detail, Tuchman illuminates four decisive turning points in history that illustrate the very heights of folly: the Trojan War, the breakup of the Holy See provoked by the Renaissance popes, the loss of the American colonies by Britain’s George III, and the United States’ own persistent mistakes in Vietnam. Throughout The March of Folly, Tuchman’s incomparable talent for animating the people, places, and events of history is on spectacular display.