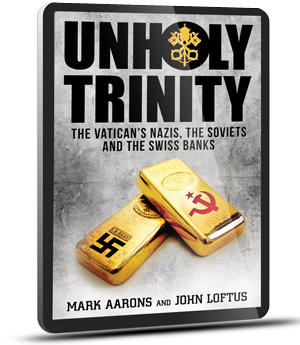 Morris West
A classic international spy story from true life, this riveting, completely revised and updated edition of Unholy Trinity recounts one of the darkest tales of World War II. Written by the co-authors of The Secret War Against the Jews, it details the Vatican’s espionage alliance with British, French, and American intelligence. Abandoning justice to Cold War amorality, thousands of Nazi war criminals were sent down the Pope’s Ratlines to new homes in America, Canada, Britain, Australia, Argentina and other South America nations, so they could be used in the supposedly greater cause of fighting Communism.

Soviet intelligence, however, was one step ahead. The Vatican’s Nazi-smuggling network had been penetrated by Prince Anton Turkul, one of Moscow’s most effective double agents, who turned the operations into a sting for his masters in the Kremlin. Many communist double agents were also smuggled down the Ratlines, spreading the Kremlin’s poison throughout Western intelligence during the Cold War.

Unholy Trinity also contains major revelations about the Vatican’s investments in Hitler’s Germany, and the role of the Swiss banks in laundering the Nazis’ plundered gold and other loot on behalf of the Pope and Western investors. Among other things, Unholy Trinity exposes how US and British code-breakers bugged the Swiss banks, and then buried their secret Nazi gold transfers, in order to protect US intelligence chief, Allen Dulles, and his family’s treasonous clients.

This updated edition of Unholy Trinity is the definitive history of a series of profoundly disturbing cover-ups involving the Holy See, Western and Soviet intelligence services, the Swiss banks, and many of the most notorious mass killers of the Third Reich. It reveals new, scandalous details that British, American, and Vatican censors are still trying to conceal out of sheer embarrassment.