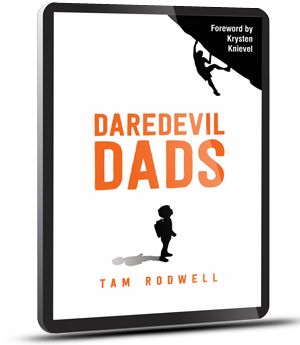 Daredevil Dads chronicles the lives of a group of men who do some of the most dangerous jobs on (and off) the planet – and in some instances even below the earth’s surface. Every day they walk out the door, they know it might be their last as they push themselves to the edge of their limits. The price to be paid if things go wrong is greater than just their own life as all have raised or are raising children and know very well the risks they take.

The book showcases lesser known jobs like Smoke Jumping as well as better-known professions such as Astronaut and Paratrooper. It also delves heavily into the world of extreme sports with big wave surfing and stunt bike mega stars who are chasing the shadow of the godfather, Evel Knievel. You’ll find tales of jumps over giant canyons, discover the sound a great white shark makes as it circles its prey, and learn about a bomb disposal expert who’s more scared of the dentist’s chair than stepping on a land mine!

Daredevil Dads is a book where men speak candidly about the thrills, spills and broken bones of life in and out of the red zone, as well as sharing their tales of epic parenting mishaps that will bring a smile to your face.